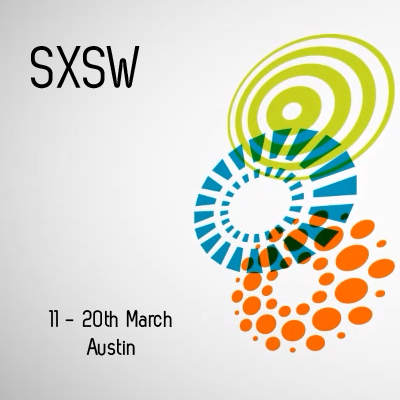 The grooviest, indiest, geekiest and probably most respected mix of festivals in southern U.S. (which also helps the Texas economy…. a lot)  is due in just 2 months… nearly 25 years old and bringing each year some of the best musicians, performances & professionals to set the trend for the coming months; and as you know other related things that go with music… films, workshops, talks, interactive media… all around the American scene, but also international: SXSW.

This year the mix is as varied & heterogeneous as always… so you have musics that go from the incomprehensible electro by James Blake or the more relaxed Fujiya & Miyagi to loads of local rock & indie bands… Experimental Aircraft, Glambilly, Los Lonely Boys…. (the full list this way).

Then you also have the film part which is a bit more mainstream and where a few future blockbusters such as “Source Code” or Jodie Foster’s “The Beaver” will premiere. And last but not least our favorite….the Interactive part, which was the last bit to be added to the festival and includes 5 days of discussions & presentations around emerging media…. loads of brands & advertising surrounding you, trying to sell you services & products, but also loads of ideas for those future twitters and foursquares…

The dates as usual….

What it certainly hasn’t changed is the pricey tickets… which at this point there’s only 2 rates left … and yes, we won’t blame you if you decide not to go, after all, you can always pick up the names of the bands & the films and download them from somewhere on the net. But then, the live experience is not comparable you know…