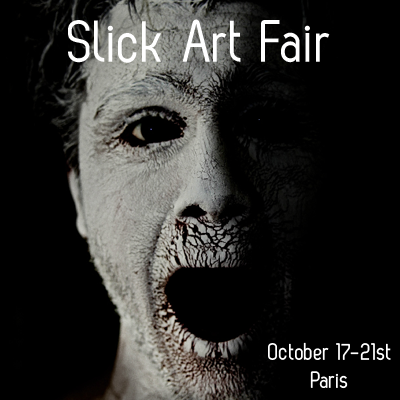 This month is hot as hell for contemporary art across Europe, next week starts London’s Frieze art fair, and the week after that gallerists will take the Eurostar down to Paris for Fiac, but just one day before the Forum @ Grand Palais opens its doors Slick is invading central Paris for some alternative art showcasing.

In its 7th edition the fair brings once again some of the latest talents across Europe to Le Garage, a new space located in the very city centre: Le Marais.

Harking from Germany, the United Kingdom, the Netherlands, Italy, Belgium and France, each gallery has chosen to either place a spotlight on a group of artists in a group show, reveal the work of one artist in a solo show, or present a unique large scale project prepared especially for the fair (the Slick Projects).

Taking over 2 floors under the roof of the Garage (a modernist building from 1937 located in a courtyard that is typical of the Marais’ working class past) the annual gathering brings 156 artists represented by 39 galleries… most of which are less than 10 old, and half of them had never exhibited @ Slick before. A lot of new fresh faces then.

There’s a good mix of veterans and newbies, although we’re missing a bigger International approach as only 30% of the gallerists are foreigners.

Some have already gotten much attention last year, such as the Backslash Gallery with the work of Rero. This year, the gallery is proposing a group show where each of the works presented will revisit the great historical art movements of the past century (abstraction, minimalism, conceptual art, Duchampian approaches), but with an ultra contemporary twist.

Parisian galleries are obviously back as this is the best time in the year to showcase their new talents…. Laurent Mueller galerie Felli, galerie UNA (who are back with three Spanish artists, Javier Callega, Daniel Chust Peters and Miguel Angel Molina and a Mexican artist Santiago Borja).

A recommended visit for those who can’t afford the always prohibitive Fiac (35€) but who have a tener in their pocket for some new fresh faces. More info on the slick fair web page.