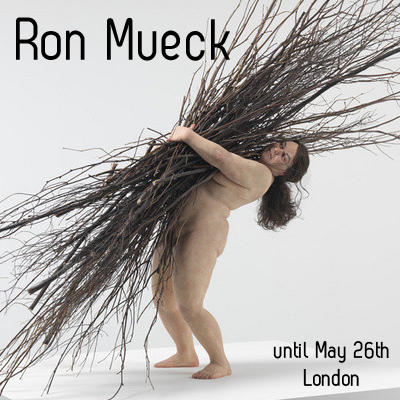 From operating puppets @ the  Australian children’s television program Shirl’s Neighbourhood to being one of Charles Saatchi’s favorite artists, easy peasy. The animatronics genius whose gigantic sculptures tend to impress and disgust at the same time is presenting his first major solo presentation in London for over a decade.

Mr Saatchi does pull out his well-kept sculptures from time to time into his London gallery but he hasn’t done so in a while, so the nice people @ Hauser & Wirth thought… “why not?”.  And so Ron Mueck gets his homonym solo exhibition which has been traveling around the world for the last couple of years.

“Ron Mueck” by Ron Mucek himself is conceived to highlight his love for scale-playfulness and his always polemic use of realism while debating the human figure and its condition. Myth and magic, death still life, naked, intuitively naked and more half-naked figures asking visitors to rethink well-known issues such as consumption, feminism and even our own morality.