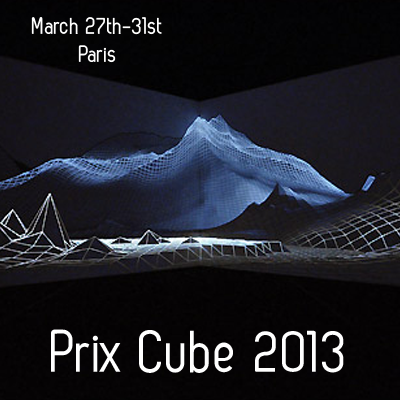 Next Tuesday we’ll get to know the winner of this year’s Prix Cube who will be receiving a grant of €10,000. With a first international expo, Prix Cube rewards the best digital art installation created by an artist under the age of 35.

The purpose of this Prize is to uncover, highlight and support work by an emerging artist in the international digital art scene by awarding a digital artwork in the following areas: interactivity, generativity, network, internet and mobility.

The nominees include… UK artist Reynir Hutber with his installation “Stay Behind the Line”, confronting the viewer with an empty room they are not allowed to access. This cell-like room is filmed in real time by a surveillance camera. But on the screen, a naked, hunched up body seems to fill the space and the viewer can interact with it.

Nova Jiang’s interactive installation Ideogenetic Machine which projects the viewer into a generative cartoon. by capturing his image in real time and directly transforming it into a “line-drawing” style of picture.

And last but not least Julian Palacz’s “Algorithmic Search for Love”… a new kind of search engine. The visitor enters a search such as “I love you” and the work created by Julian will search for every film sequence in which those words are said. The sequences are then shown end to end in real time on the screen, creating a new audio-visual narrative for the viewer.

Five amazing works which will be exhibited @ Espace Saint-Sauveur (for free) in southern Paris (just outside it’s southern city litmits) from the 27th to the 31st. A great occasion to see some of the most exciting digital artworks form the past couple of years. More info this way.