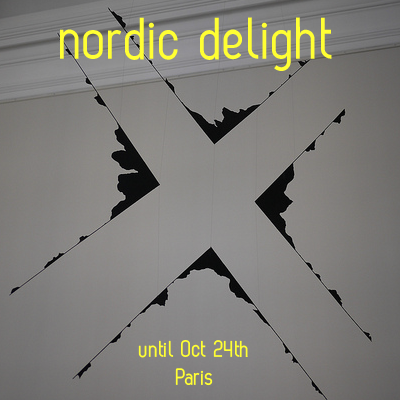 Oh god, the Nordics are back again? These Vikings want to keep invading us huh?

As if we didn’t have enough with all the buzz around Royksopp‘s new album or all the Swedish music  by Bounty, CEO & Avner, they’ve now decided to come and invade our little southern cities with their new young artists & music…

“Represented by artists such as August Strindberg, Edvard Munch or Carl Larsson the Nordic art has always fluctuated between the two extremes: lightness & darkness. For the past decades several artists have reinforced the idea we have about them being a dark society.

Is this passion for the black light a cultural specificity or a universal phenomenon? Bringing together 17 contemporary artists, Nordic Delight plays with  cultural representations, the myths and paradoxes. The works presented @ Parisian SI are both dark & bright, humorous and macabre, they’re mostly extreme allegories.