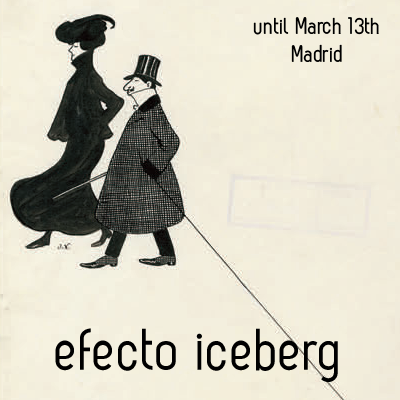 The “old” Madrid keeps rejuvenating every now and then and all those mental hospitals, electric power-stations, old theaters, breweries  & dirty warehouses are finding  new uses & opportunities…. sometimes multinationals buy old cultural buildings (Zara, H&M….) others it’s the other way round… and if not the local government, private foundations may also help with the creation of these new cultural spots in Madrid’s city center…. Casa Encendida, CaixaForum and the newspaper ABC has just inaugurated the ABC Museum of Drawing and Illustration.

ABC is one of Spain’s oldest living but dying daily newspapers…. which doesn’t mean you should read it, but their documentary, cultural & historical archives & funds are extremely rich. And so they needed a new location for a more ambitious illustration museum and their long history of collaborations with artists such as Mingote, Martín Morales or Martín Mena.

The new location is in Amaniel St. (29-31), not even 100m away from another must cultural visit in Madrid: Conde Duque Cultural Centre. The rethought building for ABC was originally a Mahou Brewery (the first one in Spain) and

The new museum has an area of over 3,000 squared meters for the development of its activities, spread over six floors, two of them underground. It has two large exhibition rooms, multifunctional rooms, a plant intended for management jobs, a repository of work, a restoration laboratory, warehouse, cafe and last but not least, the most essential…. the shop.

Very ambitious for such a decaying newspaper which on the other hand has all the XX century Spanish History in its pages.

Currently there’s an exhibition entitled “The Iceberg effect. Spanish Drawings & Illustration at the end of two centuries” those 2 centuries (19th & 20th) which only the ABC has illustrated “like no other”. 350 works from ABC”s own collection which come from its very black & white origins to its latests collaborations.

So as we say (you have until March 13th), …. nothing better to do these cold days? Go for it then! (it’s free). Or if not, as it is until mid-March you may well wait for the sun to come out and have a few cañas at the Comendadoras Square just at the back of the building.

More info on their website…. but only in Spanish for now, sorry (get used to Google translate ok?).