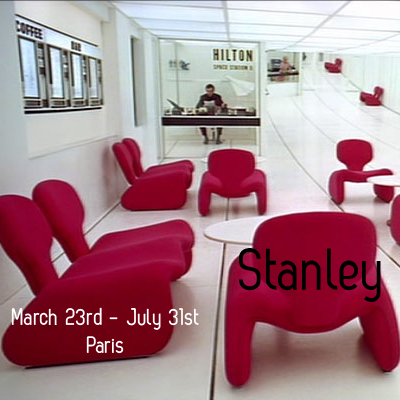 Very few directors can prove to have pushed sci-fi cinema, special effects and taboos further away than Kubrick, a genius which was (like most) a polemical & bizarre figure outside his work.

It is the first time that La Cinémathèque française hosts a travelling exhibition not initiated by their own teams but by those of another institution. This Kubrick exhibition owes its existence to the Deutsches Filmmuseum in Frankfurt and to Hans-Peter Reichmann, its Curator, who designed it in 2004 in close collaboration with Christiane Kubrick, Jan Harlan and The Stanley Kubrick Archive in London.

Since 2004, the exhibition has opened with success in several cities: Berlin, Zurich, Gand, Rome and Melbourne, before finally starting in the the Cinémathèque at the end of this month.

And from the Cinémathèque we could only expect a decent film cycle around the perfectionist figure detailed on their webpage. You should also know that the center is organizing an on-line competition “Generation Kubrick” with Dailymotion and at the same time an on-line exhibition (starting March 21st). Enjoy!

The archives of Stanley Kubrick contain numerous and precious working documents: scenarios, correspondences, research documents, photos of film shoots, costumes and accessories. The exhibition, film after film, includes the unfinished projects: the Napoleon that Kubrick hoped to direct and his project for a film on the death camps, Aryan Papers. These materials allow us to get backstage and better understand the narrative and technical intentions of the director who was a demigod of world cinema, a secret and fascinating figure. The exhibition will be installed on two floors of the Frank Gehry building, on the 5th and 7th storeys, owing to the bulk of the materials exhibited, including large-scale models and interactive digital installations.

The exhibition opens next March 23rd and runs till the very end of July. More info on the Cinémathèque website. So as we traditionally say… have time? Gonna go to Paris this summer? Then you have something to do besides visiting the Eiffel Tower!