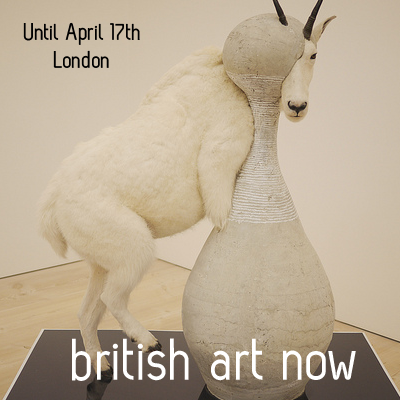 Newspeak: British Art Now part 2 is now rolling free @ the London Saatchi Gallery and while objectively compared to the first part we were not blown away as much, still, some works and many of the new new brit “artists” selected by Mr. Saatchi were captivating….

Starting with Henrijs Preiss, whose 4 iconic paintings with a heavy Orthodox symbolism makes them look like historical artefacts, highly complicated board games with complex geometric designs. His work is influenced by a wide variety of cultural sources, from religious painting to urban architecture & computer game graphics.

He was instantly one of our favorites….

Then we saw Alan Brook’s tiny portraits of photos or “historical” pencil paintings, his embarrassing confessions of well-known artists such as Cezanne, Mondrian or Munch come to play with the traditional image of these figures, their lifestyles, working spaces… maybe unveiling their dark secrets.

Brooks paints his “postcards” using a magnifying glass called Optivisor which allows him to draw all the minute details and textures of the original photographs.  The tiniest of all works in this second part, probably the greatest.

And then we found those disgusting & provocative piles of black or white mess which look like taken out of a deformed Ridley Scott sci-fi outer-space movie. Alexander Hoda says to have been inspired by a knick-knack bought on eBay… a stack of pigs piled one on top of the other… appealing?

The rest of our choice….

But for the full experience (whether you’re looking for real art…. there’s some, or maybe just to be provoked), you’ll have to visit the gallery yourself… you have until April 17th… plenty of time. And the best is that it’s free!