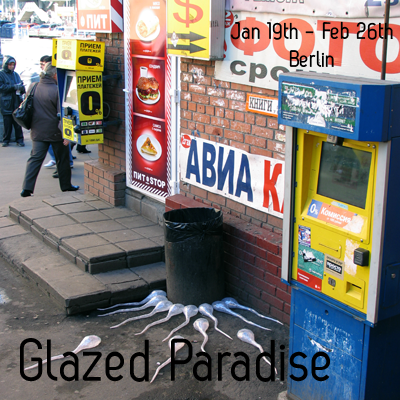 When talking about street art 90% of the interviewees think of graffiti, stencils, murals & stickers, although some respondents point at new media like LED art. Urban sculpture doesn’t mix within the traditional “public art” category and is usually left out. With the exception of some phenomenal installations, it usually isn’t as well documented nor remembered (maybe due to the even more ephemeral nature of these “radical” installations), and many times has to be “rescued” from its true environment and put into a gallery for full appreciation.

Do urban sculptures such as those of Mark Jenkins feel “natural” in the streets like a graff would? You bet, but in case you miss them when passing by Gestalten are organizing an exhibition @ their Berlin space now they’re about to publish a dedicated monograph on the artist titled “The Urban Theater“. A 160-page edition covering  a broad spectrum of his compelling, often disturbing street installations.

“Glazed Paradise” will be the first solo show in Germany by Mark Jenkins, who uses ordinary packing tape to create life-size human or animal forms. Jenkins is best known for his clever installations of these startlingly lifelike tape sculptures in urban and natural spaces as well as indoor environments such as cafeterias, toilets, and art galleries. This expert staging of his work, especially his clothed human figures, provokes various—often strong—reactions from passersby and expands his interventions into powerful performances.

“Glazed Paradise” will feature new sculptures specifically conceived for this show and made by the artist in Berlin, which will be unveiled at the January 19th opening (make sure you make it by 18:30 to meet Mark). These will be complemented by a limited edition of smaller tape sculptures. In addition to Mark Jenkins’s sculptural work, the exhibition includes photos of select installations that reveal the interaction between his artwork and its environment. Thrilled already?

An exhibition running for just over a month @ Gestalten Space. More info on their webpage.