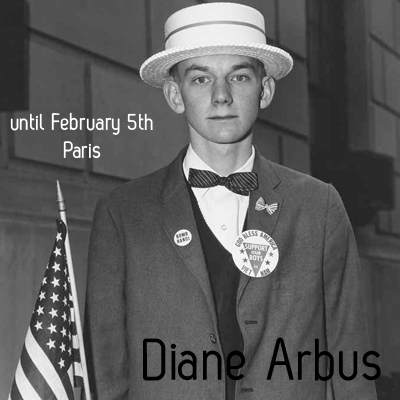 After photographing freaks, marginals and “different” people for years, Diane Nemerov started to fear that she would be known simply as ‘the photographer of freaks'”… but unfortunately for her (and right after her suicide … just when her legend begun) Miss Arbus was often referenced for her deviant photography.

We had the opportunity to see her works in Madrid a couple of years ago @ Festival Off (part of PHotoEspaña 2010) so when realizing that Parisian Jeu de Paume  via Marta Gili were bringing more than 200 of her photographs it instantly became one of our winter must-visits for the French capital.

This is her first major retrospective in the city attempting to to explore the origins, scope, and aspirations of a wholly original force in photography. It includes all of the artist’s iconic photographs as well as many that have never been publicly exhibited. Even the earliest examples of her work demonstrate Arbus’s distinctive sensibility through the expression on a face, someone’s posture, the character of the light, and the personal implications of objects in a room or landscape. These elements, animated by the singular relationship between the photographer and her subject, conspire to implicate the viewer with the force of a personal encounter.

With obvious similarities to Lissette Model’s realism (her teacher & inspirational mentor) & close to Norman Mailer & Tom Wolfe New Journalism, Arbus tended to stick to the big city (New York) as an endless source for her works. No better place than her hometown to immortalize her “contemporary anthropology”.

Either way you don’t have to make up your mind while reading this, just keep in mind the giants, transvestites, nudists & circus performers Diane used to hang out with will be waiting for you until early February, pay them a visit will ya?