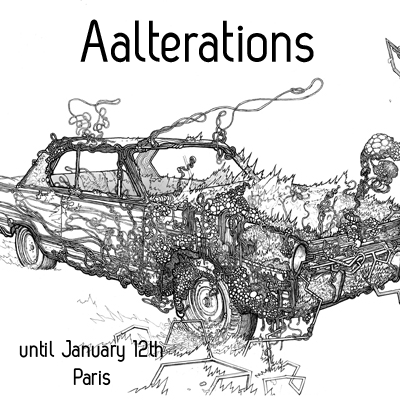 A first for Christobal de Oliveira who just presented his debut personal exhibition @ Le Cube a week ago built around his film Aalterate which draws us into exploring the psyche of a woman plunged into a coma, seeking the reason for her unconscious state.

“Aalterations” immerses the visitor in a landscape of the mind, created using constant changes and disintegrating beauty, somewhere between pure lines and crumpled sheet metal, between fruitful harmony and chaotic destruction…. the baroque futuristic meticulousness of cyberpunk is always present.

Works inspired by our own violence, explorations of our darkest nightmares… the always horrific subconscious which we constantly try to control without success. In this case the spectator crosses a space where memory is represented by hypnotically-moving organic elements, like animated shapes, with convulsions which are as fascinating as they are worrying, which seem to be held captive in vivariums. Sometimes harmonious and sometimes discordant sounds amplify the aura of mystery and anxiety emanating from these images.

Highly recommended (read our review here) Aalterations is on @ Le Cube until mid-January.