“The most satisfying way to kill someone with a baseball bat isn’t two-handed, like in the films. Rather, it’s to swing the bat high with one hand, then let the gravity help you pull it down in an arc, playing against the tension of the wrist, smashing into your victim with an easy velocity. Putting your shoulder into it, like fist-pumping the floor. It’s just more satisfying. Peculiarly satisfying. It was this sort of satisfaction that Mike was alluding to when he sent me text messages, especially the early morning ones.”

So begins Huw Lemmey’s—or Spitzenprodukte’s—first book, Chubz: The Demonization of My Working Arse. In a surprising turn of events, the book takes the genre title of fanfiction, inspired by The Guardian columnist and young Labour party member Owen Jones, and describes meticulously Chubz the protagonist’s wade-and-wank through the pool of online dating, interspersed with text-message dialogues that bring gems like “I want to pound you / pound yr hole” and “Hey. Hot. How was work? Hello. Hey. Hi. Hi. Free?” and “Green light, go, / suck my dick.” 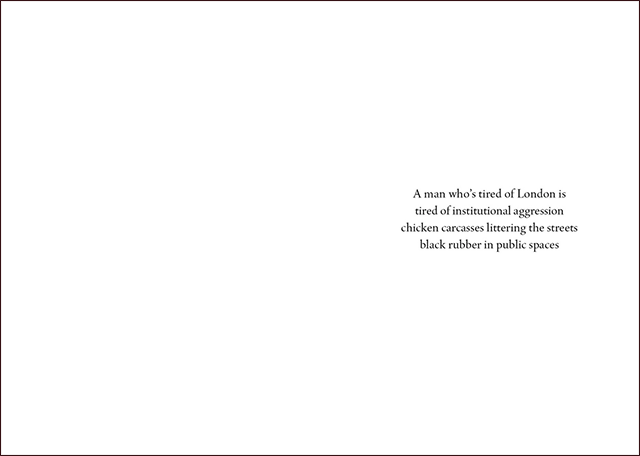 The pocket-size “fanfiction” becomes a melting pot of leftie politics, identity branding, and sex in the digital age delivered through the first-person narrative of Andrew “Chubz” Wilson, “just another NEET on the street”. Having started work on the book during a short reprieve in Dublin during the summer of 2012, Chubz carries all the heaviness of a country on the brink of disaster, described by Lemmey as a kind of “speculative futurist thing”—an experimental city created within a language of future branding.

Like most artists of his generation, Lemmey is grappling with the shifting notion of an emotional reality lived largely in an immaterial world. In his Rhizome interview, he talks about “twin territories”—online social spaces that exist somehow separately from the physical ones, “two territories superimposed on each other, a digital augmentation of reality”. It seems fitting that Chubz itself becomes a superimposition of a different reality, the title taken from Jones’s Chavs: The Demonization of the Working Class. Even the character of Jones and his “blonde hair surfing over delicious blue eyes” fits across the real man like a sooty screen; Chubz’s other regular character, the popper-manic PM Nigel “Nige” Farage almost fits the bill exactly. It is a “really interesting hook,” Lemmey says in that same interview, “to talk about the disconnect between class, sex, and politics as a Question Time debate, and as lived experience in streets and shops and bedrooms.” 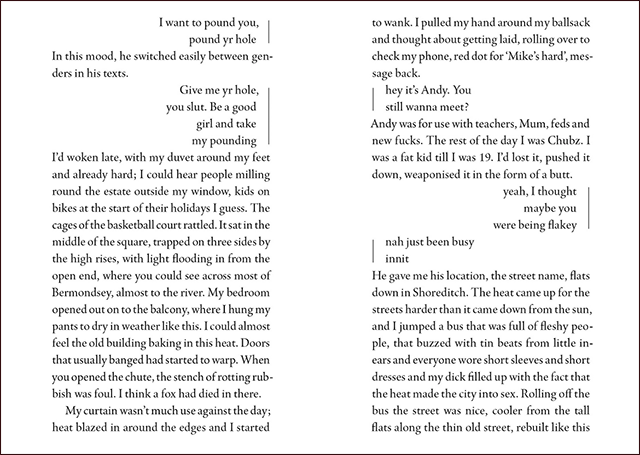 It also seems fitting that Jones is used, instrumentalised as Lemmey has said, to represent a certain kind of something—a charming, left-wing charming “crypto-twink”, as it were—branded for the purpose of the Lemmey’s book much as Jones branded himself in the publicity aftermath of his own. To brand is to superimpose, in a sense, and Chubz is Lemmey’s reaction to the stifling “Ken-doll sexuality” of public gay identity—a fictional narrative superimposed upon the veneer of a socially branded one, both somehow existing within and without the lived one—whatever that is. The reality Lemmey delivers is grimy and sexy, a place where “everyone wore short sleeves and short dresses and my dick filled up with the fact that the head made the city into sex”, imperfect and violent in a way that feels real, even if the main character is the not the real you know is Real.

What is real is what Lemmey’s getting at—how absurd, how delicious it is to the take two powerful white men in politics and demonize and humanize them both, remove them from their public platforms and party banners, strip them of their rehearsed slogans. Render them mere men again, Jones the object of a wanton sexual fantasy, something you know his handlers would deem ultimately lewd, and Farage the symbol of weakness and hypocrisy. Men who became not much more than political avatars rendered fictional and so more human.

Chubz: The Demonization of My Working Arse is available for purchase at Montez Press.