“Can the knowledge of ancient civilisations help in finding long term climate change solutions?” is the question explored by the exhibition ‘Palm Leaf Architecture of the United Arab Emirates’. The Royal Geographical Society and curator Sandra Piesik team up with book publishers Thames & Hudson and the Embassy of the United Arab Emirates to revive what they call ‘ancient knowledge’, in an attempt at cultural sustainability.

Opened by His Highness Sheikh Mohammed Bin Maktoum Al Maktoum, the main room of the exhibition contains heaps of palm leaves among photographs, landscape analysis and regional variations depicting the 7,000-year history of palm leaf buildings. Outside, a traditional Arish house has been built on the English lawn. As much an architecture exhibition as art, the focus of the palm leaves is mainly a practical one. We are reminded that they are light to transport, strong enough to survive the desert but, when used as a wall, can allow a breeze of air to slip through. These four metre-long leaves “don’t like to be drilled” says Piesik, architect and author of Arish: Palm-Leaf Architecture, continuing that “it is much better to clamp them”. 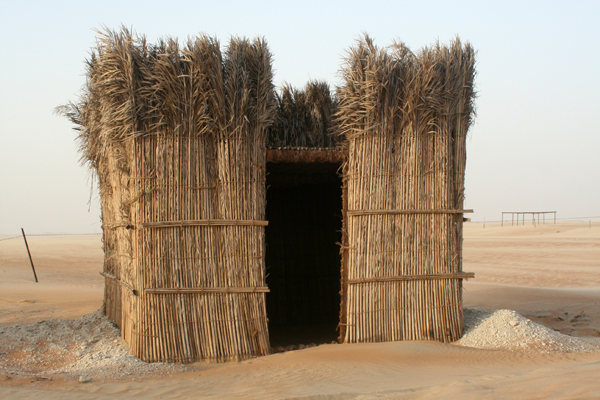 Inside the Arish house, is a delicious scent of vanilla and sweet tobacco, while Piesik adds, “vanilla, maybe, but tobacco, no! Also it was wet – and indeed there is a specific smell that comes out from wet palm leaves.”Another installation is a sculpture built by a diverse project team and volunteers from Imperial College that looks like one side of a whale’s rib.

While looking at before and after photographs of Dubai, the transformation from palm houses to skyscrapers is extraordinary. His Highness enthusiastically nudges his friends, while Piesik reminds those working in the Middle East and shaping cities in the Gulf region to remember local materials and ancient expertise. Going as far as to measure sand temperatures (71 degrees) and then the temperature in proximity of the palm leaves (45 degrees), she reminds us that, in our travels to warm countries, we rarely spend any time away from the planes, hotels and offices. His Excellency Abdul Rahman Ghanem Al Mutaiwee, the United Arab Emirates Ambassador to the United Kingdom, helped with sourcing the funding for this exhibition, though Piesik admits that for this eco-friendly material to become “cool and fashionable” and “part of popular culture” we need a Simon Cowell or a Richard Branson to weigh in on the debate. 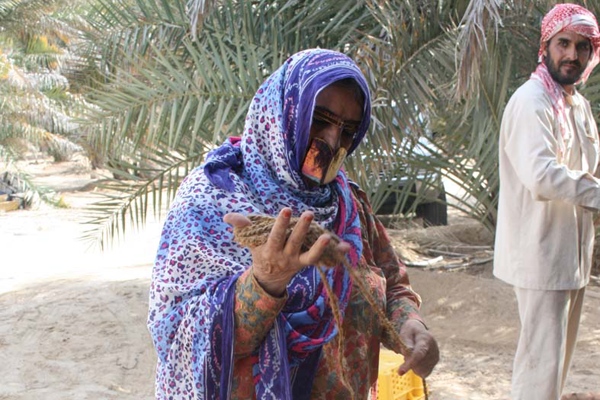 But for those of us who aren’t currently drawing up plans to build our own sky scraper in Dubai, the underlying message is: don’t be too proud to think you can’t learn something from women with henna on their fingertips and a traditional burka over their face.

“The indigenous knowledge could be used in a disaster zone in crisis situations,” Piesik says, later adding, “not just areas where palms naturally grow, but also other disaster zones, where there is bamboo for instance or other materials. If we don’t do something with these leaves, then the knowledge that local people once had will soon be lost.”