The body isn’t even cold since California’s Mika Miko called it quits in late-2009 and already bands are pillaging and using the remaining members for their own ends. Texan garage and R&B melting-pot The Strange Boys have made no secret of their love for and affinity with the high-velocity, mostly-girl, misfits who injected the West Coast ‘Smell’ scene with their explosive energy and now they can call co-vocalist Jenna Thornhill one of their own. Having expanded the original four-piece to a half-dozen and following replacement of another ex-Miko Mika, drummer Seth Denham, the Austin-based band lives up to the city’s reputation as a melting pot of musicians and influences. As residents of the world famous SXSW festival and a geographically centralised location, The Strange Boys are a peculiar hybrid of myriad stylistic influences and regionally diverse band members.

Numbering two Californians and the rest of Texas, Illinois and New Jersey birthplaces, this third album Live Music is as difficult to categorise as is its regional loyalties. Following up the explosive power of their long awaited debut album The Strange Boys and Girls Club in 2009, the more visceral, considered and lyrically sophisticated follow-up, Be Brave, in 2010 tore the band away from inevitable comparisons to the history of American garage rock –from Black Monk Time up to The Black Lips –and well into ambiguous, though significant, song writing territory.

Where front man Ryan Sambol’s shriek-y man boy vocals share an uncanny similarity to the latter Georgian band’s Jared Swilley, it seems that he rightly assumed the position of obnoxious All-American rabble-rouser has been filled. Instead, Sambol applies his mumbling slacker introspection to some heavy existential questions over the languid back-and-forth of his fellow band members; splashed over a meandering guitar jangle and loose drumming, sprinkled with all manner of instrumental bric-a-brac and, sometimes, even sardonic doo-wop harmonies. 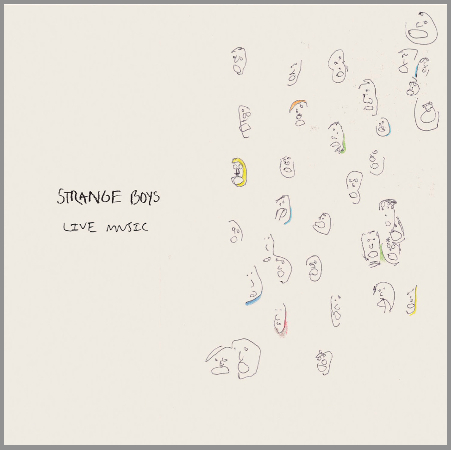 Drunkenly trodding through territory more resemblant of a heavy-lidded Woody Guthrie or an elderly Bob Dylan, Sambol often imperceptibly moans his way in and out of songs, as the rest of the band follow. This commitment to a slippery elusiveness is reflected in the resonance of a punk cheek still present in their titles. The album name is meant to be pronounced as in ‘to live in the basement’ and not ‘Live and Unplugged’ as one might presume, while the heavy content of ‘Over the River and into the Woulds’ is alleviated by a title-pun.

That song is a lyrical and compositional standout, a story of love and loss comparable to that alt-country behemoth Lucinda Williams. A heartbreaking melancholy pervades through Sambols’ half-croaked whisper as he sobs, ‘You can go and make a child/ but you can’t keep it from dying’. Meanwhile, the perverted barbershop scatting of the fellow band members in the trundling folk of ‘Walking Two by Two’ stands in contrast to the tongue-in-cheek instrumental number ‘Opus’ –clocking in at a mere two and a half minutes and sounding like a guitar when it cries.

It is uncommon for punk and DIY bands to last beyond their second and third album and it seems, that in moving away from the raw immediacy of a very visceral self-expression, The Strange Boys are digging deeper. Placing well-deserved stock behind the craft and tradition of folk song writing in the wake of other proudly earnest contemporary shoe gazers like Kurt Vile, Sambol and company might have a few more albums in them yet.

(Live Music is out October 24 on RTR, photo by Sal Rodriguez)