For someone born and raised on American television programming, California’s alternative comic duo, Tim & Eric are the True Prophets. It’s terrifying how accurately they portray their ugly and sad television personalities. It’s like Sarah Silverman and her straight-faced racism that walks that very thin line between satire and downright bigotry; those Libertarian Americanisms that seem to announce –‘it’s all right, because I said it’. Australia’s Chris Lilley (Summer Heights High, Angry Boys) is similar but the boundary-pushing mirror of cultural intolerance in his extreme parodies, like ‘Squashed Nigga’ performed by his blackface alter ego Smouse!, might have just gone too far.

One is confronted by a similar dilemma when watching Tim Heidecker and Eric Wareheim live at the Electric Ballroom in Camden. Their outrageous humour could either have you crying with laughter or livid with contempt for their absurd nonsense. There’s the grotesque caricature of Heidecker’s greasy-haired ‘Casey Tatum’ singing out of tune hits, while Wareheim prances around behind, dressed in a hamburger suit that sometimes slides up to reveal a padded jock strap.

The mood varies from heartily laughing out loud, to being mortified at having spent the last hour and a half reveling in extended jokes so nonsensical it regresses to the level of adolescent toilet humour. That’s an opinion echoed by Heidecker himself as he halts a medley starting with their underground YouTube hit, ‘I Sit Down When I Pee’. Right in the middle of a rendition of ‘Bloody Nips’, Heidecker –in high waisted shorts and rubbing red paint over his nipples poking through holes in his t shirt –stops and says, “We’re doing this and suddenly it just dawned on me how stupid it is.” This is after a ten-minute-long opening with the two performers singing ‘Diarrhea’, dressed in skin-coloured body suits with enormous fabric testicles hanging from between their legs. A projected advertisement of an elderly man recommending easy-clean plastic ‘D Pants’ for uncontrollable bowl movements (“No Solid Loafs”) –is graphically depicted as he sprays them down on a between-set ad sketch of their famous ‘nightmare version of television’.

What self-respecting adult, you ask, could watch this over and over again? That’s precisely the point. As we observe a chronically ill ‘Tatum’ squeak his tuneless vocals over a microphone, clutching his stomach, then vomiting on his audience front of stage, one is reminded of the cultural rot that is the absurd schadenfreude of the American Idols and Next Top Models of the world. The people in the crowd are also the lucky recipients of a rain of hot dogs, water pistol spray, some spitting, plus a barrage of abuse from Heidecker, in response to heckling in a Michael Richards-esque outburst as he walks out mid-show. 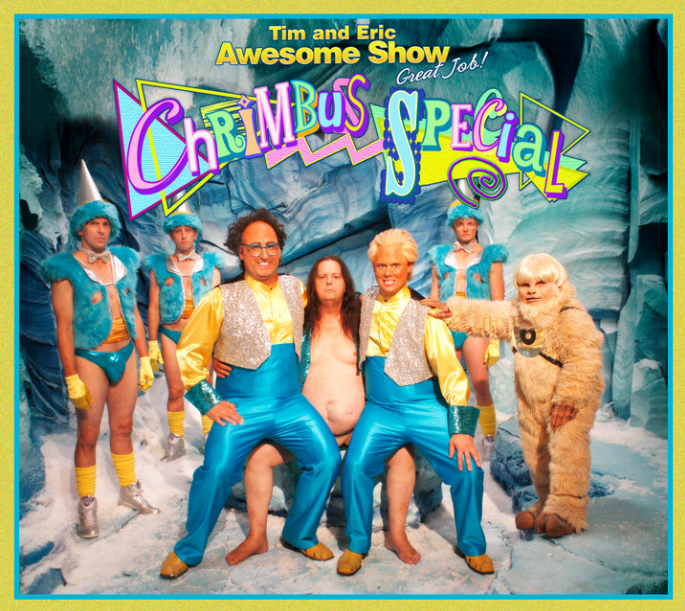 Graphics and production is a big part of the Tim and Eric universe and they do not disappoint on a live scale. Where the nuance of Heidecker’s droll facial expression is lost without the aid of a camera zoom from a film studio, Wareheim takes on the mantle of physical humour on stage. There’s even an interactive element of the New Aged virtual reality, where the crowd could clap its approval to a choice of three potential segments projected from a screen on stage.

Paul Rudd made an on screen appearance, sitting at a computer and ignoring his wife’s phone calls to watch ‘Nude Celery Man’, while the outmoded cheese ball sitcom format gets a going over in ‘Just 3 Boyz’. It sees an equally droll Zac Galifianikas making a cameo, a College student home for the holidays baring pigtails and sex toys. Will Ferrell and the unforgettable John C Reilly, as Dr Steve Brule, are further evidence of Tim & Eric’s eminence on the Californian comedy scene.

Finally, after parodying American patriotism by gracing the stage dressed in US flag and closing their European Tour (comprising only England and Ireland) by calling British people a bunch of ‘c***s’, Heidecker offers a single moment of sincerity for their entire set. He thanks his audience for being part of a small group of people who can actually appreciate their messed up, obscene sense of humor.